I love getting out and about. It’s good for fitness, and we also live in a very beautiful country containing lots of awe-inspiring buildings. A particularly keen interest of mine is in history, so what better way to combine both passions than exploring a magnificent ancient ruin?

Just prior to the lockdown, my partner and I felt the need to get out and about and had located a suitable hotel online and so we stayed in North Yorkshire for a long weekend and made sure we thoroughly explored our surroundings. We found we weren’t far from Rievaulx Abbey (Click Here To Visit Site) which I’d heard about but never seen. The weather was decent so off we went. 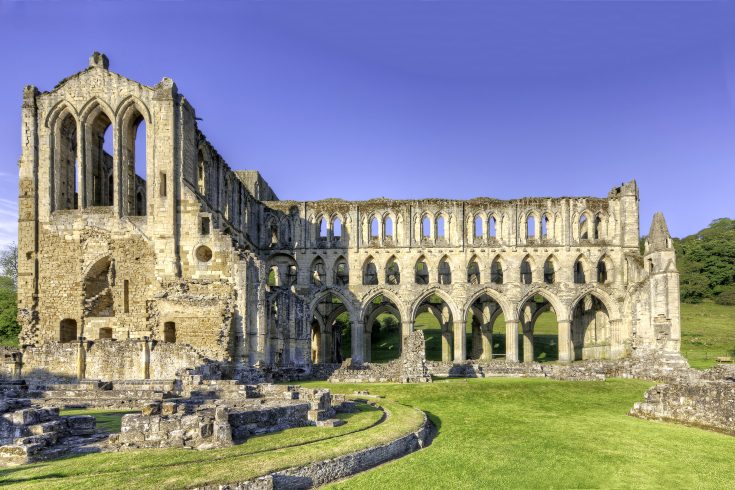 Historical excursions like this often bring me into contact with the National Trust or with English Heritage who commonly run these sites. There’s another kind of history going on here – although I greatly value the work these grand bodies do, I wish they’d take some well-meant advice sometimes. I’ll show you what I mean….

Prior research online shows that English Heritage have prepared some kind of Access Report or Rievaulx with sections covering different disabilities. This is literally a tick-box exercise in parts, but a sincere attempt has been made.

We arrive and enter the clearly signed car park and find the fairly clearly signed disabled spaces. The spaces are appropriately wide but don’t have the transfer space marked out so you have to think about what side of the space you park in to make sure someone doesn’t accidentally park alongside and block your access to the car door. But I can understand this – you are on an ancient site and you don’t want to make your new buildings look like a fairground with yellow paint and garish signs around everywhere.

So, we enter the Shop/Reception. This is lovely – modern wide passage ways, access to displays, accessible café, good toilets – so far, so good. 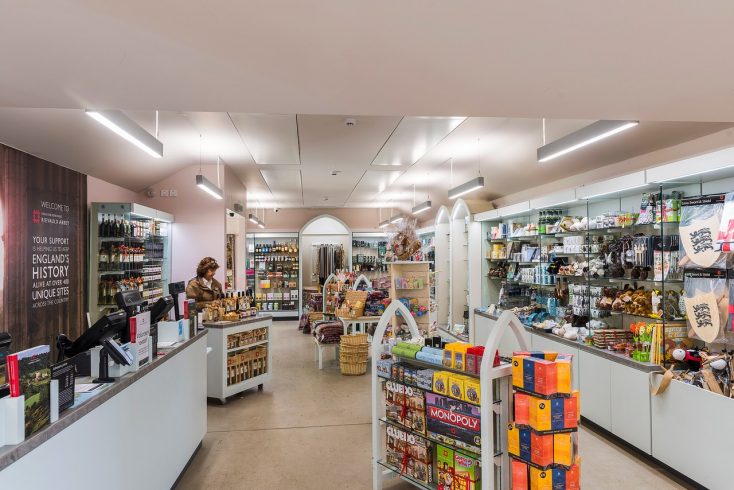 As we paid our entry fee, we were told what we could get to and what we probably would struggle with. Fair enough, but we’d never been before so it’s a little difficult to take it all in and remember it later.

Of course, a map would be really useful here. We were shown one but not given one. You have to buy a leaflet with the map inside. We were given tickets and a receipt but nothing to help you navigate the site.

This is typical of these bodies – they are first and foremost conscious of the money they need, not the welfare of their visitors. OK, I get that, but for me, struggling with the terrain, I don’t want to miss a suitable route or take a wrong turn so a map would be indispensable. We were given an audio guide. My partner used that – they aren’t that useful to someone pushing a wheelchair up hill and down dale, where items in pockets or round your neck can be an encumbrance.

On site, leaving Reception we pushed up the main path to the ruins and Museum. The surface was firm and smooth and we reached the Museum alongside the ruins quite easily. This old path was slightly raised from the surrounding grassland, possibly for drainage, but for most people it was an easy step down onto the grass to run across and reach the lower level of the ruins if they wanted. A slope for me could easily have been dug out onto the grass (the path wasn’t historical in any way), but no-one had thought of it, or if they had, they’d hidden behind the dreaded phrase “Sorry, I’m afraid it’s listed!” 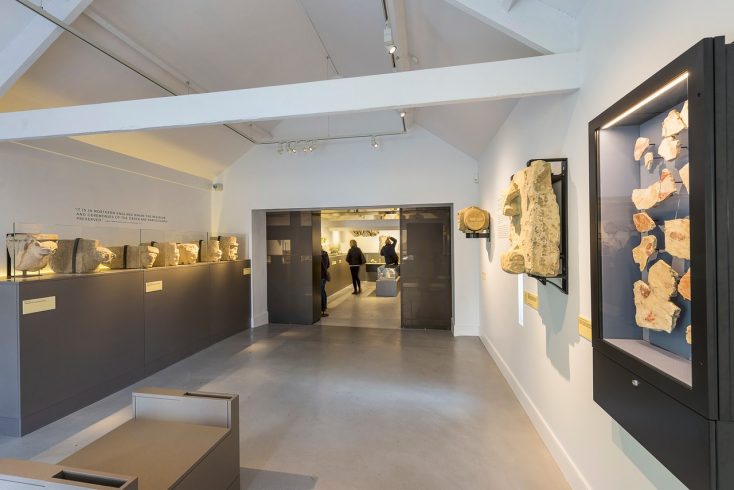 The Museum was excellent. Modern, accessible, lots of imaginative displays, spacious, well lit. From here you can clearly see the ruins and plan your route. Basically, you walk across the grass, but it’s rough and undulating and the whole site is built on a steep slope. Not so obvious with a wheelchair (or for anyone with a mobility issue). We looked around and saw where an old path had once crossed the grass (now overgrown), and I could see where I could go with a little help to reach this path without traversing very steep gradients or risking tipping over sideways. So, we reached the ruins. The route was wet because dense natural grass will retain moisture long after the last rain, but it could be done.

But if I could think that route through in a couple of minutes, why couldn’t they? Why was a suitable path not marked out or indicated on a clear map? If the argument is that they didn’t want to disrupt the historical site in any way, then why not deploy a plastic path or similar? There is a wealth of practical options available – just go to any outdoor summer festival and see what’s around!

Once at the ruins and having remembered enough of my initial instructions, there was enough on the level for me to reach about 70% of the site without too much trouble. Of course, you will get some mud on your wheels so you can’t be too precious about what coat you’re wearing! 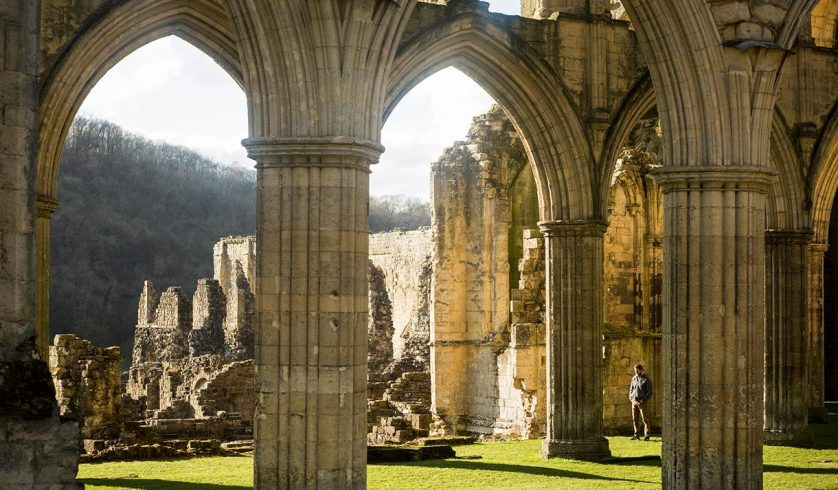 There were a couple of very old wooden ramps in situ which needed renewing and re-siting to improve their usefulness, and a couple of corners where a little woodwork could have enhanced the access and views immensely (woodwork which could have been easily lifted away for any filming or historical research), but generally there was plenty for me to see.

There were excellent information boards and plenty of numbered sites for the audio guides, so I was just a little irritated that the physical access hadn’t been attended to sufficiently.

What I envisage is not expensive – I see a lack of will and imagination. Give the Museum architect/designer free rein and the result is a lovely, modern, truly accessible space in every meaning of the word. Similarly, for the Shop/Reception/Cafe.

Why not apply the same attitude to the historical site itself? It seems to me that imagination isn’t employed here. Historically, people have hidden behind the ogre of listed status and literally stopped thinking about improvements. But these bodies are tasked with preserving these sites for the nation – and the nation contains a lot of disabled people!

It’s a failure of will, attitude and imagination. (I asked if the fire door out of the back of the Museum could be opened to let me reach my chosen grassy route more easily and they wouldn’t – they couldn’t get permission as the boss was off site!) That sort of attitude epitomises the way these bodies think.

I have tried long and hard to engage with these bodies over the years, but it’s tough. There have been noticeable exceptions but usually I’m greeted with – it’s all in hand, thank for your concern, we already have a focus group dealing with that, we are acting on a previous report, we have an access advisor already, and so on. I won’t stop, but they don’t make it easy!

P.S. I also know that there is a cottage on site which is used as a holiday let. I also know from online photos that this is not accessible. I was tempted to ask if it would be possible for me to rent it, but I think I might save that argument until next time! You can’t use them all up in one go!